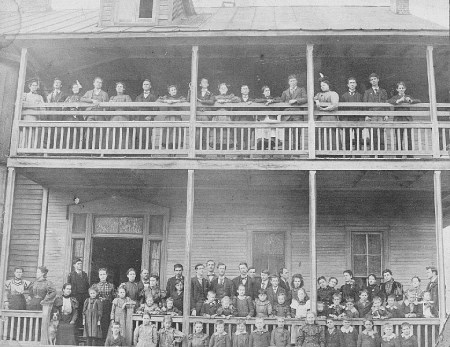 “Fear not, little flock; for it is your Father’s good pleasure to give you the kingdom” from St. Luke 12:21 was the first sermon given by Elder Sterling Gresham Jenkins to eleven charter members who founded, constituted and organized on Saturday, January 8, 1870 a church known as Cross Plains Baptist Church. The “Little Flock” worshipped in the Cross Plains Academy from 1870 to 1878. 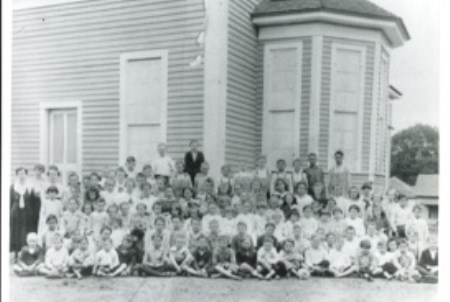 Rev. Henry Augusta Williams, a missionary Baptist church builder, lead in the building of a small wood framed one room white-clad board first house of worship for the growing “Little Flock” on Daily Street in Piedmont in 1878. 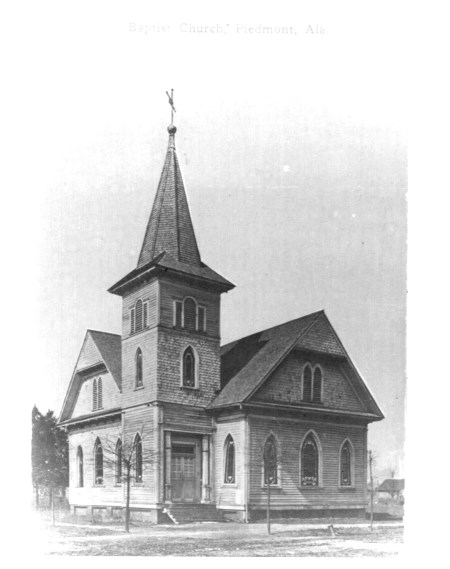 The “Little Flock” under the leadership of such pastors as Rev. George Dent Harris and Rev. Joseph Ray Wells would build a larger more eloquent house of worship on donated land at the corner of Main and Ladiga Streets in 1905 and legally formalize the name of Piedmont First Baptist Church. The first half of the 20th Century would see the “Little Flock” grow spiritually and numerically through the hardships of two world wars and the Great Depression. 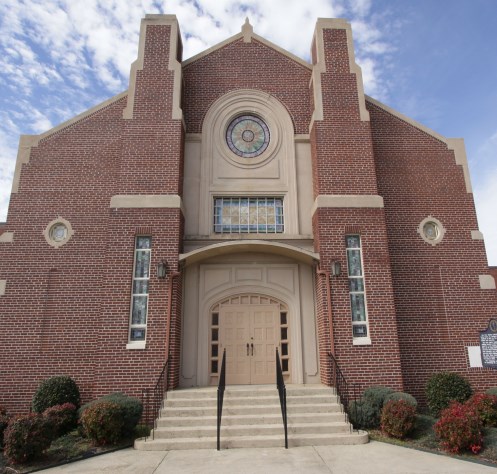 As its various ministries (Sunday School, Music, Women’s Union, Young People’s Union) grew, and as the Lord blessed the faithfulness of the “Little Flock,” the challenge and vision to raise and save funds to build the present-day church complex was accepted by Rev. Robert Edgar Hood and congregation during the 1940’s. The second half of the 20th Century would see the construction of the First Baptist Church Sanctuary (1950) under Rev. Ralph Edmond Longshore, the North Educational Wing (1953) under Rev. Frank Edward Bowman, South Educational Wing (1960) under Rev. James Holland Thomas and the West Wing Complex (1991) under Dr./Rev. Randy Phillip Evers as a physical testimony of their faithfulness to the ministry. The “Little Flock” of the First Baptist Church entered the 21st Century with a vision of building a South West Children Wing (2005) under Rev. Derrick Smith.

As the “Little Flock” approaches its sesquicentennial anniversary (Wednesday, January 8, 2020) to celebrate 150 years of rich Christian heritage and service, the First Baptist Church of Piedmont, Alabama continues to faithfully seek God’s will and direction under the pastoral care of Senior Pastor Michael Ingram.

The history of Piedmont First Baptist Church (1870-1995) has been documented in a book, "The Little Flock". 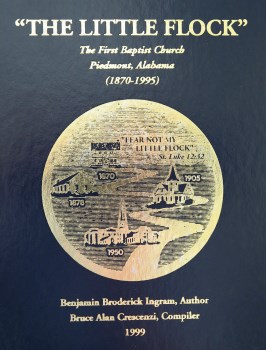 Learn more about the rich history of Piedmont First Baptist Church (1870-1995) by contacting the church office to purchase a copy of "The Little Flock".