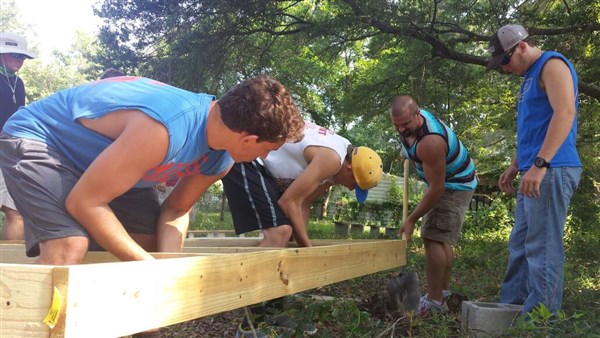 We encourage and promote missions at Piedmont First Baptist Church in Piedmont, Alabama. We believe that through the death, burial, and resurrection of our Lord and Savior Jesus Christ, we receive salvation thru asking and accepting Jesus into our hearts. We want to GO "on mission" to share our faith and belief with others. Our church looks for opportunities to "partner with a purpose," therefore carrying out the Great Commission as Jesus instructed us.

The offering was started in 1895 by Woman's Missionary Union® (WMU) to benefit the work of the Home Mission Board (now North American Mission Board). In 1934, it was named in honor of Annie Armstrong, a bold missions advocate and WMU's first national executive leader. Today, more than $1 billion has been donated by Southern Baptist churches and individuals to support thousands of missionaries in church planting and compassion ministries. Because of this sacrificial giving, millions of lives have been and continue to be transformed by the power of the gospel.

Since its inception in 1845, the Southern Baptist Convention (SBC) has always had one mission—the Great Commission (Matt. 28:19-20). To fulfill its assigned part of this divine mandate, each SBC entity made special offering appeals to the churches. The Southern Baptist worldwide missions enterprise is funded in large part through the unique, efficient, and equitable Cooperative Program. A portion of the undesignated tithes and offerings of our church becomes Cooperative Program dollars.

We have partnered with missionaries John and Dana Gunter to serve in the Dominican Republic. They presently serve as North American Missionaries in Dothan, Alabama, but have continued to lead mission teams from numerous churches to serve in the Dominican Republic where they previously served as Southern Baptist International Missionaries. FBC Piedmont has been blessed to be a part of this effort.

Nehemiah Teams are leading the next generation to reach every nation... standing in the gap among the unreached and the hard-to-reach. Nehemiah Teams offer short-term mission projects that have eternal results. We are blessed to be able to partner with missionaries Jess and Wendy Jennings in this effort. We have been able to provide transportation for team members as they travel from briefings and debriefings in Rainesville, Alabama to the Atlanta airport. We are currently working with Nehemiah Teams to identify and develop software systems to assist in the administration of this awesome mission effort.

Crosspoint International Ministries is a non-profit organization that exists to bring Christians together to take the gospel of Jesus Christ to all nations. We have partnered with Crosspoint International missionary Omar Alvarado to serve in mission activities at Mount of Olives Baptist Church in Posoltega, Nicaragua, where Felix Madina is pastor.